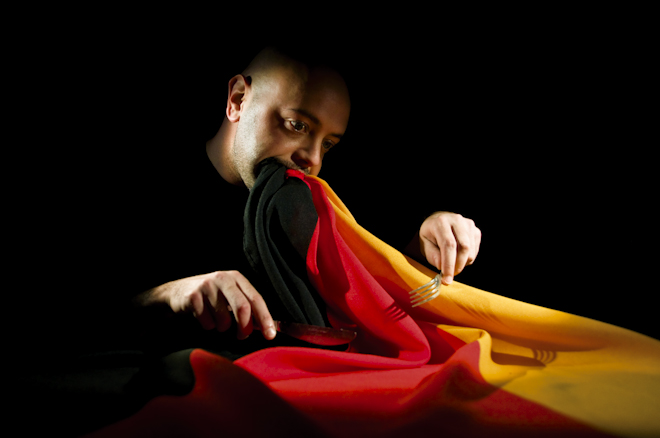 This is how Germany tastes, Antonio de Luca

Currently, we are witnessing the reawakening of identity aspirations worldwide, in which people are reaching for national symbols. In the process, they are also being appropriated by groups that are trying to reinterpret democratic and liberal symbols for their exclusionary messages. A development that can also be seen in Germany.

On November 9, 2020, German Federal President Frank-Walter Steinmeier took a very clear position against the misuse of the German flag by extremists.

“Black, red and gold, these are the colors of our democratic history, the colors of unity and justice and freedom. We must not allow them to be hijacked and abused by those who want to foment new nationalist hatred. ”

The appropriation of national symbols is calculated. For example, the NPD, the oldest right-wing extremist party in Germany, abandoned the imperial colors of black, white and red years ago in order to present itself in black, red and gold in its election campaigns. However, nothing has changed in terms of the party’s nationalist and racist program.

Conflict researcher Andreas Zick from Bielefeld speaks of a “real flag theft” and sees that right-wing groups succeed again and again in occupying the colors with their idea and thereby decoupling them from their origin as a unifying symbol. On the other hand, the flag plays no role in pro-democracy demonstrations like #unteilbar or Refugees welcome. There are even participants who report being insulted just because they were carrying a Germany flag.

An experience that Enrico Brissa, chief of protocol of the German Bundestag, also made at the #unteilbar demonstration. In his book Flagge zeigen! (Show your colors!), published this year, he writes about this disturbing situation for him and his family and wants to show why state symbols like the German flag are needed, especially in times of crisis.

“Why do we accept that the symbols of our republic are increasingly occupied and reinterpreted by the extreme right? We must not lose our symbols, because we have no others!”

Enrico Brissa, author, lawyer and chief of protocol of the German Bundestag

But is “more flag” the solution? Or does that only promote an exaggerated national self-centeredness? Klaus Boehnke, Professor of Social Science Methodology at Jacobs University Bremen, is certain that wearing national insignia first creates distance from others. According to Boehnke, the main question is how we deal with increasing diversity, not how we seal ourselves off from it.

“Nationalism or patriotism are backward-looking orientations, and the flags represent just such an understanding of society.”

I can find something in both arguments. I, too, am disturbed by demonstrations draped in black-red-gold, but at the same time I find Enrico Brissa’s appeal plausible. Especially because the flag in the wrong hands leads to the fact that black-red-gold is perceived at home and abroad as a color code for nationalism, hatred and exclusion.

In essence, this was also the motivation for launching the Farbwerte (Color Values) initiative in 2009. The goal was to position the flag as a projection surface in participatory formats and to charge it with affirmations of diversity, but also with criticism and contradictions. The aim was not to elevate a national symbol, but rather to create individual interpretations and personal classification through creative means. Perhaps this is the right way to take away contempt, exclusion and hatred.

I am sure that this debate will continue for a long time.